Daniel’s vision in chapter seven adds a new layer of detail to the prophecies of The King’s Dream in chapter two. The prophet described seeing four great beasts emerge from the sea, different from one another. This vision is exceedingly dense with symbolism which serves as a key to understanding the prophecies in the Book of Revelation. For this reason let’s not speculate as to what any of these symbols might mean, but rely on the text itself to explain them. For example, in verses 17, 18 and 23, the prophet is told the beasts are kingdoms, therefore we can safely ignore any notion that a beast (in a prophetic sense) is anything other than a kingdom. I want to make this point because this prophecy is intimately linked with the vision recorded in Revelation 13 which describes two beasts, an image of the beast, and a mark of the beast.

In the first year of Belshazzar king of Babylon, Daniel saw a dream and visions of his head as he lay in his bed. Then he wrote down the dream and told the sum of the matter. Daniel declared, I saw in my vision by night, and behold, the four winds of heaven were stirring up the great sea. And four great beasts came up out of the sea, different from one another. The first was like a lion and had eagles' wings. Then as I looked its wings were plucked off, and it was lifted up from the ground and made to stand on two feet like a man, and the mind of a man was given to it. And behold, another beast, a second one, like a bear. It was raised up on one side. It had three ribs in its mouth between its teeth; and it was told, “Arise, devour much flesh." After this I looked, and behold, another, like a leopard, with four wings of a bird on its back. And the beast had four heads, and dominion was given to it. After this I saw in the night visions, and behold, a fourth beast, terrifying and dreadful and exceedingly strong. It had great iron teeth; it devoured and broke in pieces and stamped what was left with its feet. It was different from all the beasts that were before it, and it had ten horns. I considered the horns, and behold, there came up among them another horn, a little one, before which three of the first horns were plucked up by the roots. And behold, in this horn were eyes like the eyes of a man, and a mouth speaking great things. [Daniel 7:1-8]

These four great beasts represent the same four kingdoms from The King’s Dream in chapter two: Babylon, Medo-Persia, Greece, and Rome. This is logical as both prophecies concern kingdoms, dominion, the span of time from the prophet’s time to the end of this time, and they both conclude with divine intervention. That being said, these prophecies are a remarkably detailed testimony of what is now history.

The first was like a lion, and had eagle’s wings: I beheld till the wings thereof were plucked, and it was lifted up from the earth, and made stand upon the feet as a man, and a man’s heart was given to it. [Daniel 7:2-4]

The lion is symbolic of many things, but it’s arguably most synonymous with king. i.e., the Leo constellation and its star Regulus, and Christ as the lion of the tribe of Judah. The prophet Jeremiah used the lion to symbolize Babylon when he prophesied the coming destruction of Jerusalem: “A lion has gone up from his thicket, and a destroyer of nations has set out; he has gone out from his place to make your land a waste. Your cities will be ruins without inhabitant." [Jeremiah 4:7]

Daniel described the lion having wings like an eagle. When this beast’s wings were plucked and it was lifted up to stand as a man, a man’s heart was given to it. Ezekiel expands on this heart of man imagery in the prophetic warning to the prince of Tyre: “Thus says the Lord God: Because your heart is lifted up, and you have said, I am a God, I sit in the seat of God, in the midst of the seas; yet you are a man, and not God, though you set your heart as the heart of God…" [Ezekiel 28]

And behold another beast, a second, like to a bear, and it raised up itself on one side, and it had three ribs in the mouth of it between the teeth of it: and they said thus unto it, Arise, devour much flesh. [Daniel 7:5]

The bear raised up on one side is the kingdom of Cyrus the Great, the three ribs in its mouth and the command to devour much flesh identify his conquering of the Medes, Lydians and the Babylonians. Long before the birth of Cyrus, the prophet Isaiah called this king by name and declared him Yahuah’s anointed: “Thus says the LORD to Cyrus His anointed, whom I have taken by the right hand, to subdue nations before him and to loose the loins of kings; to open doors before him so that gates will not be shut." [Isaiah 45:1]

Isaiah also prophesied of the Messiah, saying, “The Spirit of the Lord GOD is upon me, because the LORD has anointed me to bring good news to the afflicted; He has sent me to bind up the brokenhearted, to proclaim liberty to captives and freedom to prisoners." [Isaiah 61:1]

Cyrus serves as a typology of Christ; he ended the rule of Babylon and set her captives free. These events in our history are a foreshadowing of events still to come.

After this I beheld, and lo another, like a leopard, which had upon the back of it four wings of a fowl; the beast had also four heads; and dominion was given to it. [Daniel 7:6]

Due to the subdivision of the Greek empire into four after the death of Alexander the Great, this leopard has four heads and four wings.

Hippolytus understood these symbols, as he explained in the second century:

In speaking of a ‘lioness from the sea,’ he meant the rising of the kingdom of Babylon, and that this was the ‘golden head of the image.’ And in speaking of its ‘eagle wings,’ he meant that king Nebuchadnezzar was exalted and that his glory was lifted up against God. Then he says ‘its wings were plucked off,’ i.e., that his glory was destroyed; for he was driven out of his kingdom. And the words, ‘A man’s heart was given it, and it was made stand upon the feet of a man,’ meant that he came to himself again, and recognized that he was but a man, and gave the glory to God. Then after the lioness he sees a second beast, ‘like a bear,’ which signified the Persians. For after the Babylonians the Persians obtained the power. And in saying that ‘it had three ribs in its mouth,’ he pointed to the three nations, Persians, Medes, and Babylonians, which were expressed in the image by the silver after the gold. Then comes the third beast, ‘a leopard,’ which means the Greeks; for after the Persians, Alexander of Macedon had the power, when Darius was overthrown, which was also indicated by the brass in the image. And in saying that the beast ‘had four wings of a fowl, and four heads,’ he showed most clearly how the kingdom of Alexander was parted into four divisions. For in speaking of four heads, he meant the four kings that arose out of it. For Alexander, when dying, divided his kingdom into four parts. [Ante-Nicene Fathers, Vol. 5]

After this I saw in the night visions, and behold a fourth beast, dreadful and terrible, and strong exceedingly; and it had great iron teeth: it devoured and brake in pieces, and stamped the residue with the feet of it: and it was diverse from all the beasts that were before it; and it had ten horns. [Daniel 7:7]

Hippolytus lived under the rule of this kingdom when he wrote:

The fourth beast (was) dreadful and terrible: it had iron teeth, and claws of brass. Who, then, are meant by this but the Romans, whose kingdom, the kingdom that still stands, is expressed by the iron? for, says he, its legs are of iron. [Ante-Nicene Fathers, Vol. 5] 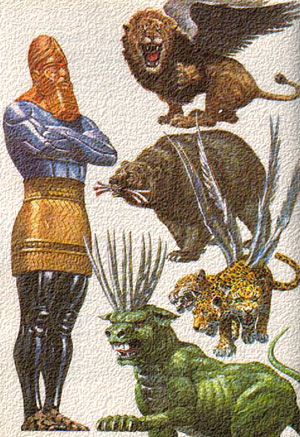 After this, then, what remains, beloved, but the toes of the feet of the image, in which part shall be of iron and part of clay mixed together? By the toes of the feet he meant, mystically, the ten kings that rise out of that kingdom. As Daniel says, “I considered the beast; and, lo, (there were) ten horns behind, among which shall come up another little horn springing from them;" by which none other is meant than the antichrist that is to rise… As these things, then, are destined to come to pass, and as the toes of the image turn out to be democracies, and the ten horns of the beast are distributed among ten kings, let us look at what is before us more carefully, and scan it, as it were, with open eye. The golden head of the image is identical with the lioness, by which the Babylonians were represented. The golden shoulders and the arms of silver are the same with the bear, by which the Persians and Medes are meant. The belly and thighs of brass are the leopard,by which the Greeks who ruled from Alexander onwards are intended. The legs of iron are the dreadful and terrible beast, by which the Romans who hold the empire now are meant. The toes of clay and iron are the ten horns which are to be. The one other little horn springing up in their midst is the antichrist. The stone that smites the image and breaks it in pieces, and that filled the whole earth, is Christ, who comes from heaven and brings judgment on the world. [Ante-Nicene Fathers, Vol. 5]

Hippolytus knew the Roman beast would be divided into ten. He also identified the little horn, which shall come up among the ten, with antichrist.

Continue to The Little Horn Part 1